It's probably the largest knit I've ever had to block. For some reason, I only realized it this morning ;-) How will I proceed?

I went to KnitPicks and thought they had some pretty cool blocking mats, but still, one kit is nine 12" squares and my current project is already bigger than that. It would also be best that I block it really soon (I can't afford waiting one more week).

Look what I found in the toys department at WalMart? Thirty-six 12" squares that can be arranged in may different configurations. This is probably more than I will ever need! Sixteen squares will be enough for my current project. And it will be great for scarfs, shawls, afghans, everything! 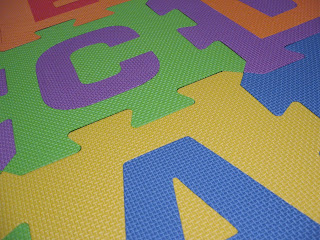 I'm sure that no one at the store suspected that these were bought to act as blocking mats!!!

Have a great weekend everyone!

I use them too, they're perfect since you can arrange them and get excactly the right size blocking mat. Have a great weekend!

I got a set from Knit Picks for a gift but I have been looking for a bigger set I need to check out my WalMart to see if they have any.

That is a fantastic idea!!! I think I am going to have to follow your lead. Can't wait to see the project.

Very cool idea! Can't wait to see what the secret project is!