My first FO of 2016!  Will there be more in 2016?  We will see...  My next objective is to knit my sister the pair of socks that she chose the pattern and yarn for last year.  She's been hinting for quite a while that she would like me to knit some socks for her :)  I hope she can have them next Christmas!

I've had the Aviatrix Hat in my queue for a long time!  I finally bought it as I thought my Manos del Uruguay leftover yarn would look nice in it! But then, I realize that it was too small for my daughter. I was getting ready to start it again in a larger size when... 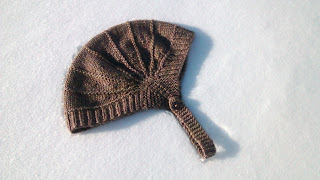 ... I got a few invations on Facebook to join 25 000 tuques!  A "tuque" is a winter hat in French. This is a super cool project that has gathered a lot of knitters in the province of Quebec (the project was initiated in Montreal) but also everywhere in the world to knit a hat for all the Syrian refugees that have and will arrive in Canada during the awful war that is ravaging their country.  In Canada, every newborn is welcomed into the world by receiving a little knitted hat to stay warm.  Local knitters provide them to the hospitals.  My daughter received one when she was born!  All knitters who knit a hat have to attach a personalized message.  And it works so well so far that they are talking about continuing it for all people who arrive in Canada!  Everyone thinks it is a great and very human gesture!  Those people are like you and I.  They wish to live in peace and give that gift to their children.  I'm sure you can join whereever you come from!

All of this to say that this hat will go to a little Syrian boy or girl.  So touching... And I will give a few other hats I've knitted but kept in a drawer.

Oh, one funny fact.  The Musée McCord in Montreal is hosting some events.  Visitors can see the knitted hats that are deposited at this museum.  I've read somewhere that someone said that these hats could not be hand knitted because they were so beautiful :)  I thought it was really funny!

OK, enough about that.  You can see my project page on Ravelry for more details.  Basically, I chose a color very similar to the pattern main picture and did not make any modifications.  When you like a pattern, you just like the pattern :) The pattern is well written and it is interesting to see how it turns out.

Finally, I also finished the Easy Peasy Newborn Sock Hat today but it was too late to take a picture outside.  It will be in a separate post!

Have a lovely end of the week!  I hope it is not too cold where you are. Here it is freezing... brrrr! xx