Last night was our knit night and Catherine came! Catherine is a co-worker who I discovered a few months ago is also a great knitter and I had decided to knit the Baby Tweed Blanket for her baby girl to come! I still can't believe how lucky I have been to be able to give her her gift before the baby is born (and that is one day after her due date)!

I had planned to finish it early January before she'd stop working but no... with the cold that kept me sleeping for days and the fact that I had to order a sixth ball of Tahitian Pearl just two rows from the end, I finished a little later than planned.

Knitting that blanket went like a charm! The stockinette was really soothing. The yarn is really nice and spongy. Then, the edge is so pretty and interesting to knit. It does not look as neat as on the pictures below before it is blocked, but the blocking worked its magic once again.

Drying or I should say sun bathing on my new "blocking mats": 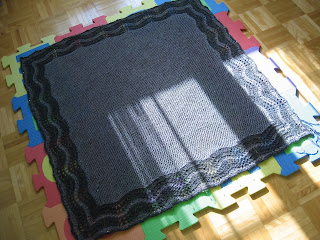 Oh, do I love the curly edge! 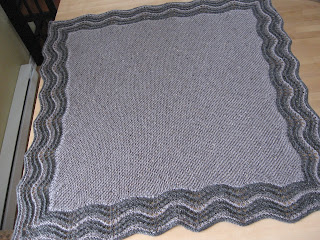 Pattern: Baby Tweed Blanket by Jared Flood (Brooklyn Tweed)
Yarn: Knit Picks City Tweed DK
Needles: US 9 / 5.5 mm and US 10 / 6.0 mm
Color: Tahitian Pearl (5.3 skeins) and Orca (2.14 skeins)
Start to finish: November 20, 2010 to January 22, 2011
For: Catherine
Modifications: Absolutely no modification. It's the first time I knit a pattern from Jared Flood, I could not have modified it! However, to be able to knit it without modification, I've had to order an extra skein of Tahitian Pearl! If I had read comments on Ravelry, I would have known...

I think this is my favorite picture: 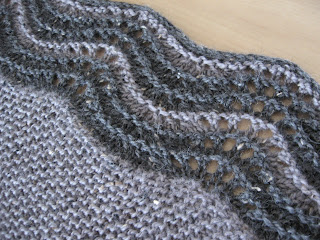 I could not resist trying to take a photo like the one on the pattern: 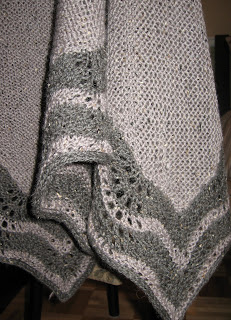 It looks rather rustic but really is soft and enveloping...

And finally, I had fun simply wrapping it with a large pink ribbon: 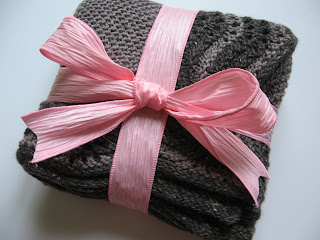 Now, I can't wait to hear from Catherine and see her baby girl! Hoping that they will both join us soon at our knit nights!

Way to finish it on time! It is so lovely. Those gorgeous edges...

It turned out so lovely!

She was holding out hoping you would finish it & its beautiful. I think her baby will love it.

Wow, such cuteness. A very nice knit. Well done and I'm sure your friend is super happy about it.

So so beautiful! I love the edging!

It's beautiful and I'm sure it's going to be so appreciated over the years!

Wow, that is absolutely lovely! gray is one of my favorite colors!

What a beautiful blanket. I love it!

This is so beautiful. A few babies due around here soon and I just love this pattern!