Last Wednesday, I've given the gift I have been knitting and kept secret on this blog since the end of April.  I finished it one month ahead of time which really happens seldom in my case for baby gifts!  Usually, it is blocking at the last minute, the day before the baby shower.  I'm sure it happened to a few of you ;-)  I must say that my vacations helped and My Sister's Knitter KAL was a great incensitive!

This is a lovely free pattern that many knitters made with a variety of yarns.  In my case, the Illîmani Yarn Baby Llama was a nice discovery!  It is so soft and the natural colorways are beautiful.

I originally bought 4 skeins but in the end I used exactly 3.  I cast on 133 sts compared to 83 in the pattern and made the same number of repeats as instructed (that is 9) and realized it was already a square.  The pattern says the final measurements should be 24 x 32 inches.  In my case, it ended up 37 x 37 inches which is better in my own opinion: 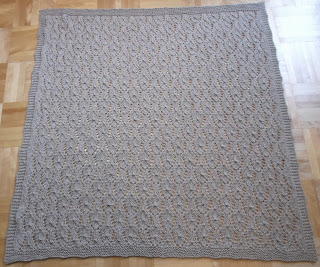 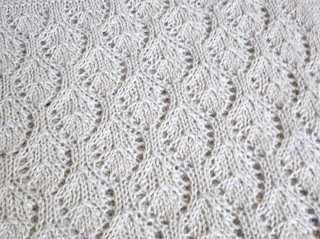 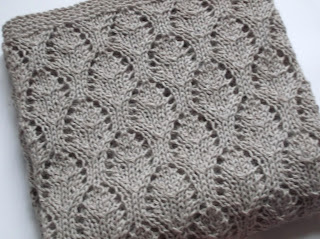 The picture I took outside is really the one that shows the color as close as it is: 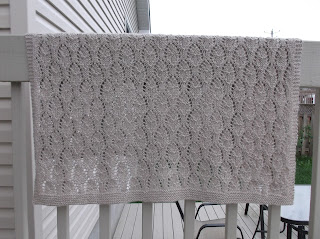 Finally, the only bad thing about this project is that the yarn is not superwash...  I'm really a bad girl to give such a gift to a friend :(  I will have to learn better...

See my project page on Ravelry.

Have a wonderful weekend everyone!
Posted by Maryse at 9:44 AM

What a marvellous gift! I'm sure it will be loved and cherished despite it's not superwash :)

Such a gorgeous blanket! It will be treasured :)

How beautiful! It will make a wonderful keepsake!

This is such a pretty blanket. I love the leafy pattern too!

I think a hand knitted baby blanket it one of the best gifts you can give. It says welcome in such a big way. Your blanket is just lovely. Mysistersknitter KAL helped me get some long overdue stuff finished too!

wow - REALLY gorgeous! i love the leafy pattern too. and i can't believe you got it done a month early!

it turned out absolutely gorgeous!!

so pretty! What a great pattern stitch!