Happy New Year 2010 everyone! May this new year bring you love, health, happiness and of course, a lot of time for knitting!

There it is, my first FO for 2010! Like the pattern pointed out, these fingerless mittens come pretty close to instant gratification. They were knit in less than two weeks which is a great achievement in my case! 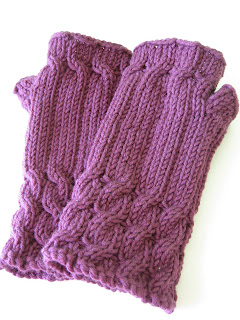 Pattern: Fetching by Cheryl Niamath (Knitty)
Yarn: Filtes King Extra, less than 2 skeins
Needles: US 8 / 5.0 mm
Color: Pink (2991)
Start to finish: December 2009 - January 2010
For: Me
Modifications: CO 40 sts instead of 45. Regular BO instead of picot. The two modifications were made in accordance to many comments I read from other knitters. 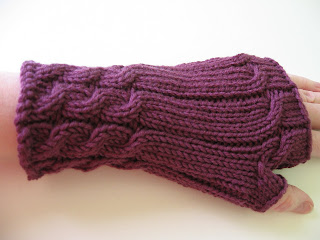 At first, I was not sure about the yarn because it gives an aspect quite different from the other Fetchings I had seen. The stitches stand out more than I had expected. I also found the yarn to be splitty when I casted on, but it was fine after that. In the end, I think my Fetchings are really pretty! This is a very warm pink. Final verdict: totally happy with them! 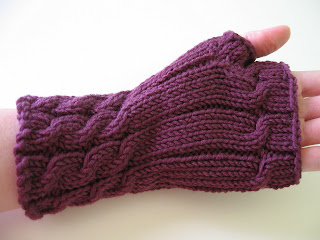 Now what is next? Socks! Today, I start training for the Ravelympics. I have some beautiful yarn that was given to me as a gift more than a year ago by Marie-Michèle at a knit night. It's so pretty! It is Lorna's Lace in a nice combination of pink, purple and blue. It will be used to knit one sock. I want to try knitting a whole sock before I knit a pair during the Ravelympics. I'm a little scared about the foot part. With 17 days to knit a first pair, there is no time for technical problems!

I have to go buy new sock yarn for this project. Probably next Friday. If you have suggestions for a yarn that is not too expensive (it will be my first pair of socks after all, you never know how they will turn out), feel free to make suggestions! I think I'd like a solid color but with darker/lighter shades in it... The pattern is Monkey and the motif is really beautiful in itself.

I also bought a copy of Vogue Knitting on my way back from work last night. What a great way to start the weekend! 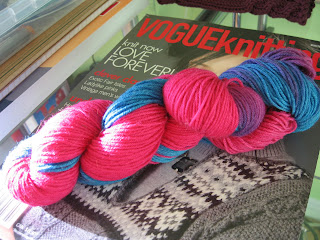 A great weekend to you all!

The fetchings look wonderful. Socks arent too hard to knit from the top down and the foot part is easy, just remember to concentrate when knitting the heel and as long as you pick up the stitches evenly you wont get any holes! I cant wait to see your practice sock.

Cascade Heritage is a great sock weight yarn. It's usually sold in solids, but they do have some hand-painteds (at least I remember reading that somewhere). I've seen it sold anywhere from $10-12.

Keep us posted on that first sock!

Happy new year too :) Full of knitting and all the usual, of course ;)
Love the model of fetching... simple and easy, I love mine!

Monkey's a great sock pattern, I've been eyeing that for a bit now...
How do you like the new VK? I thought it was disappointing this time...

So that's what they are called! I so need some of those. Our old house is FA-reezing right now and I can barely even type.

I just learned how to knit yesterday. The experience was laughable but promising. My first project was a scarf turned rainbow.

Good job on those Fetching, I already knit this pattern twice and they were for the same person !!! :) Yours are gorgeous and I love the color !

Fetching is a great pattern! I knit 12 for Christmas 08 - still get compliments on my pair all the time.