This is the latest project I started. I named it Lilas. Its official name is "Gilet manches courtes #136" from the Catalogue Créations 2005/06 - Bergère de France.
In its former life, it was a a debardeur I had started in 2007. Two weeks ago, it was still alive. But then, I frogged it. It was definitely pretty but I've known for a long time that it would never fit - but kept lying to myself that it would... So I finally frogged it and looked into magazines, catalogues and Ravelry - this is a lot of fun too! - for a new pattern I could knit with 7 skeins of Coton Fifty from Bergère de France.
One of the pattern that is in my queue is Henley Perfected by Connie Chang Chinchio. I think it's a very pretty piece of clothing. I considered it very seriously. However, I think this pattern calls for a cold wintery color more like green or blue. Not lilas. And probably a yarn different from Coton Fifty.
Here is the magazine photo of what my "petit gilet" will look like and then, my progress (I took the picture one week ago). It is the perfect mindless knitting project. I really enjoy it at night to relax while watching TV. 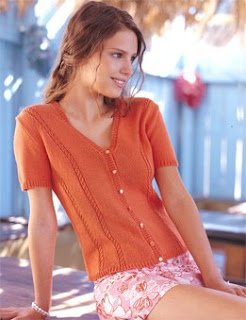 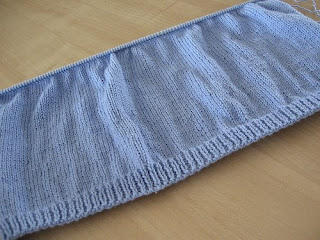 Clever choice! Very delicate and feminine model. It will definitely suit you, and especially in that lovely shade of "lilas". I'm very curious about your Cotton Fifty though. I just love to knit with cotton, and seldom find some in finer gauges. Yours seems a very nice one. Glad you could find a model worthy of it! Can’t wait to inspect it from a closer point of view.

Oh it's going to be lovely, and that is my favourite colour!

That's a beautiful color! Can't wait to see how it turns out :)